AirSelfie is the only portable flying camera integrated into your mobile phone cover. 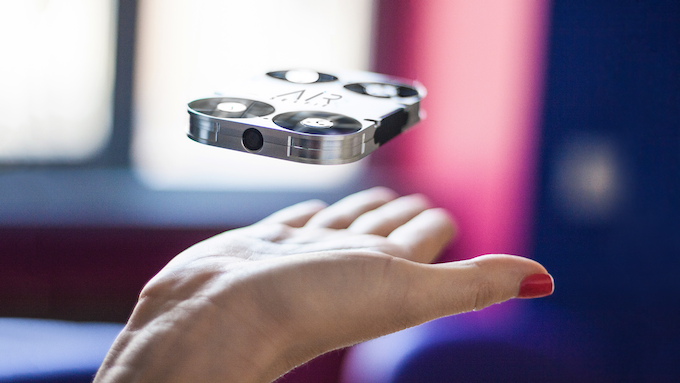 AirSelfie is the world’s smallest portable flying camera. Who said selfies were confined to sticks? With this ground-breaking device you’ll be able to snap aerial photos directly from your phone. Sky’s the limit.

AirSelfie is a registered trademark and all its components are protected by filed and grantend patents. 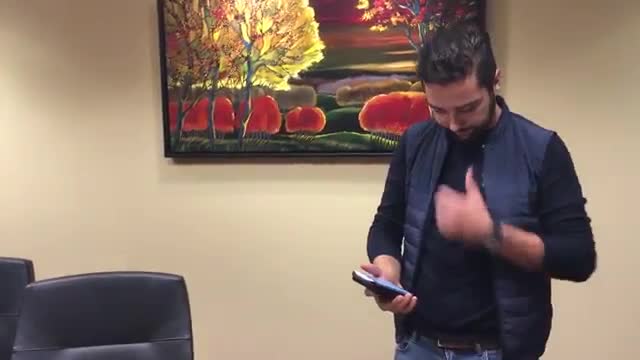 Check out our demo with Time Warner Cable News 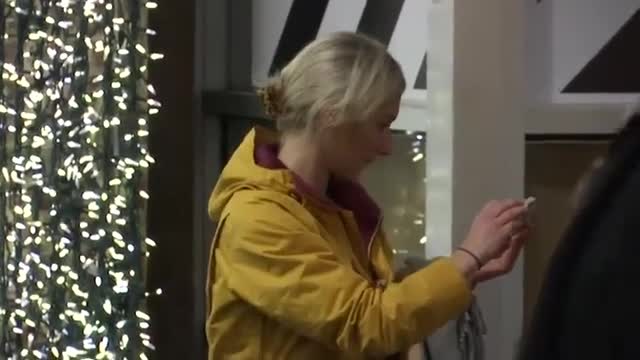 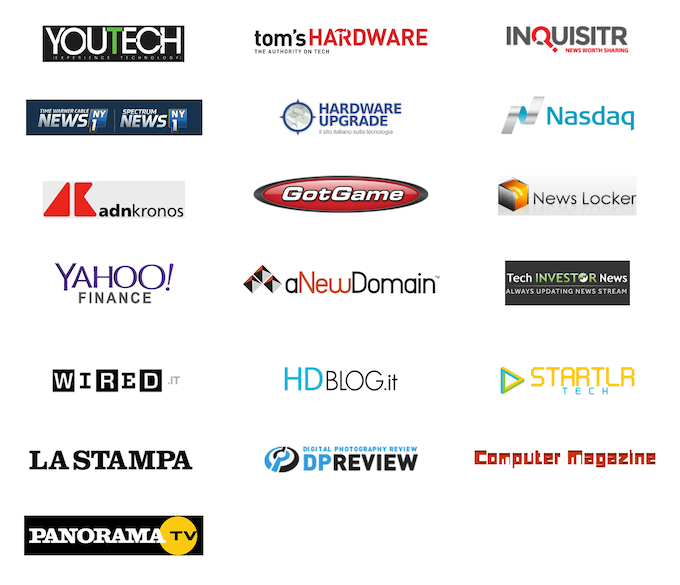 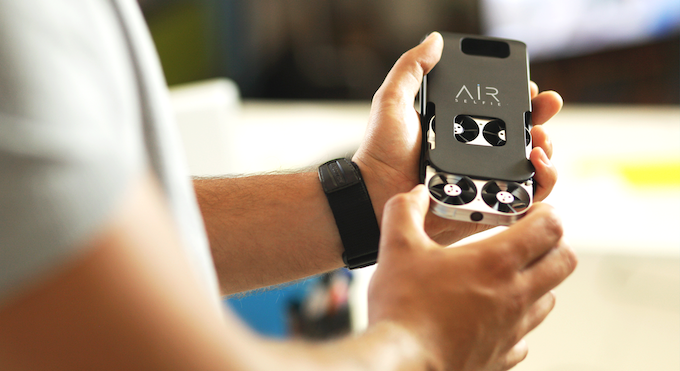 Take AirSelfie out of its cover and launch it from your phone using the AirSelfie app available foriOS and Android. 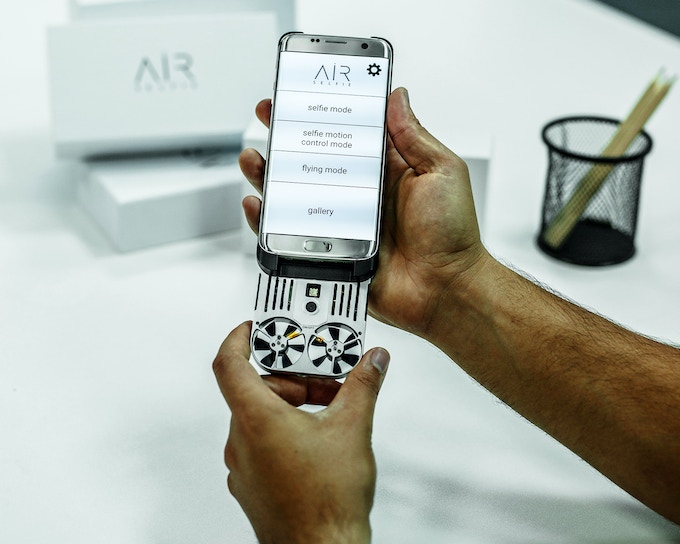 Fly AirSelfie and control it directly through 3 different flight functions: 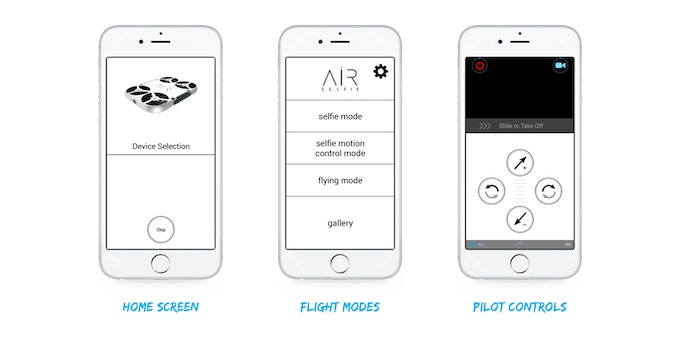 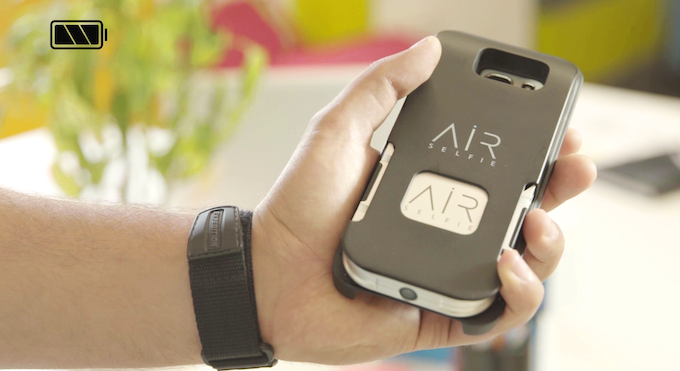 Land AirSelfie onto your open hand and place it back in its case where it will be recharged. 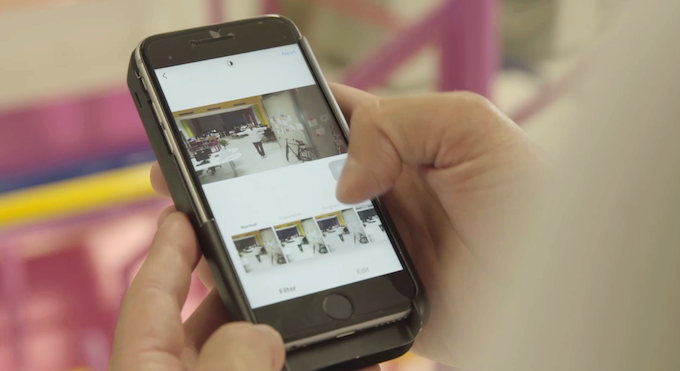 The pics will be immediately downloaded to your mobile device via wifi, ready to be sharedthrough your favourite social media platform.

Say goodbye to your selfie stick or stretching your arm out till it hurts.

You can place AirSelfie in its designated phone cover (which acts as a charger too) and unchain it whenever you want to take an aerial picture or video.

Fly AirSelfie – micro-device HD camera – comfortably from your phone, by using the AirSelfie App and take the most amazing selfies. AirSelfie is compatible with all iOS and Android Operative Systems.

You’ll be able to build unforgettable memories through a new perspective.

There are no limits to when and where you can use AirSelfie.

Outdoors or indoors, its avant-garde portable technology makes it easy to use whenever and wherever you feel the need to catch your lifesize emotions. 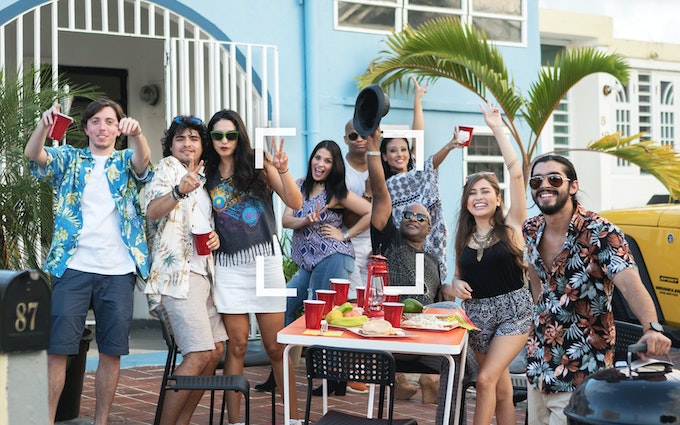 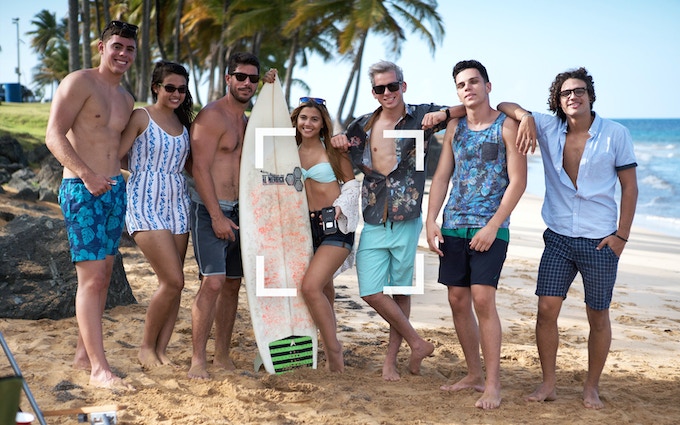 Don’t miss any detail of your fun day at the beach. 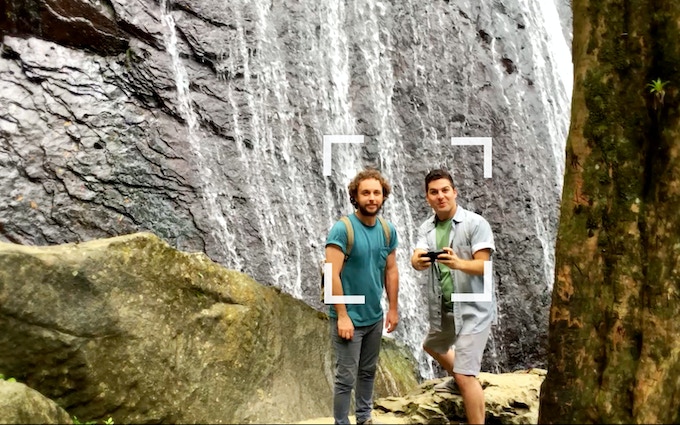 Explore new worlds from above! 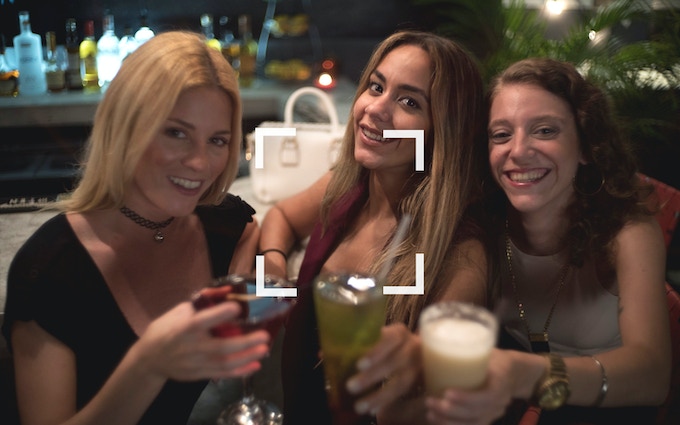 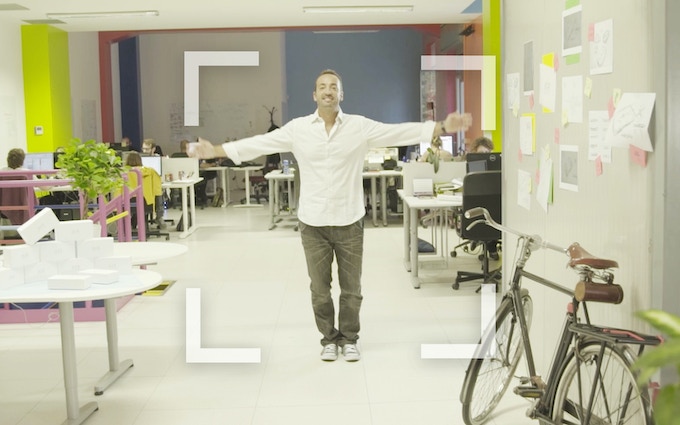 Hang mid-air and get the full picture! 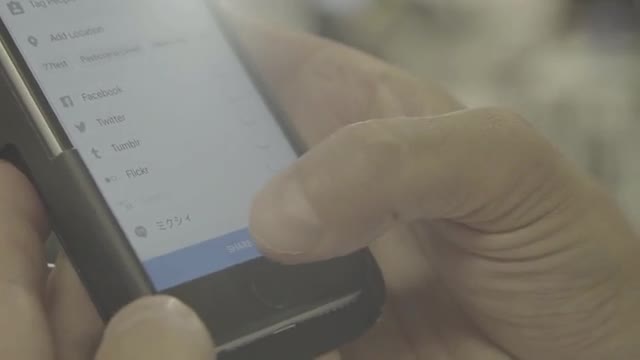 Make your video accessible in other languages and to deaf and hard-of-hearing backers.

Post straight to social media! You can post photos and videos taken with AirSelfie immediately on social media. All photos and videos are automatically sent to the smartphone via WiFi and appear on the app. From there, you can choose which ones to save in the smartphone gallery and then upload to your social networks to start generating likes and shares from your friends and followers. 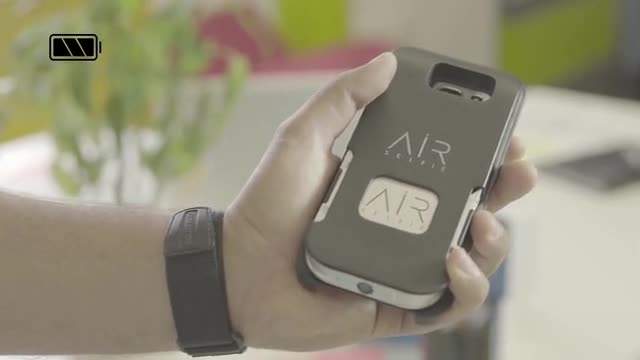 Recharge it easily! The cover contains a battery that can recharge AirSelfie in just 30 minutes when put back inside of it. Alternatively, AirSelfie is also rechargeable directly with the cable. 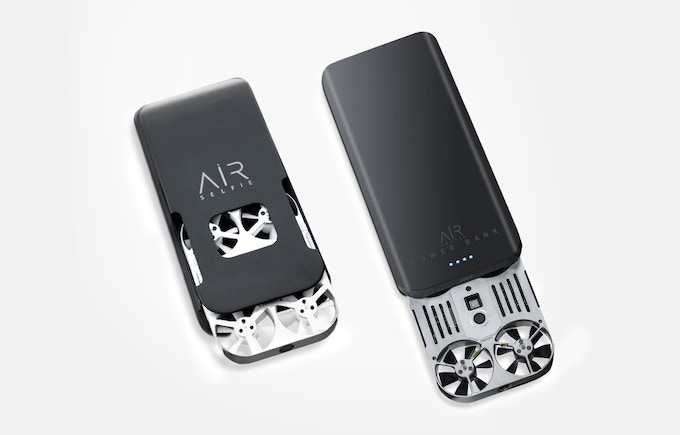 Make it fly up to 1 hour with the portable Power Bank! The AirSelfie Power Bank is designed to be perfectly integrated with the flying camera. It gives you the possibility to charge it up to 20 times before running out of charge, thus allowing AirSelfie a flight autonomy of 1 hour overall. You can pledge it alone or in combination with AirSelfie.

AirSelfie was born from the gritty intuition of Co-Founder Edorardo Stroppiana, combined with the love of passionate individuals for technology. We are a vibrant International team who decided to go beyond standard perspectives and the usual rules. With offices in Hong Kong and London, high tech originating In Shanghai and exquisite Italian design, we are truly an international cooperative.Through research, careful planning, skilled tech development and slick design we decided to CHANGE THE RULES by developing a unique product: AirSelfie. We are so enthusiastic to finally launch AirSelfie into the market. We want to share the excitement of finally catching lifesize emotions from up in the air with EVERYONE. People don’t usually fly camera drones because they’re hard to operate, the cost is high and they’re bulky, but with AirSelfie we’re starting a creative revolution, where all these issues vanish into beautiful aerial pictures and videos!

Hi Backers! We have worked for 2 years on getting the final version of AirSelfie into the air, testing different prototypes, working side by side with different engineers and finally getting AirSelfie to the point where we can proudly say we are ready for production! We just need your help to get the product out there on a bigger scale in order to get AirSelfie to you as soon as possible! By pre-ordering you will help us manufacture bigger AirSelfie volumes and in return you’ll become the first to catch simple and beautiful life moments from above. We thank you in advance for taking the time to see what we are all about. 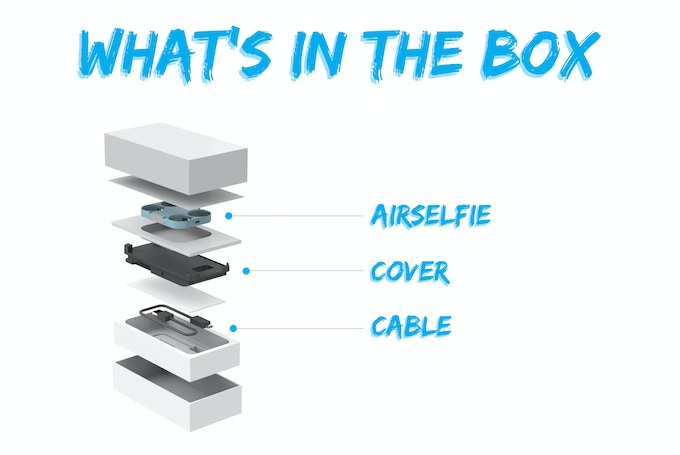 The AirSelfie package contains, based on the pledge you select:

All tech projects may run into unexpected issues somewhere along the lengthy winding road which goes from designing a prototype to the actual final product creation.

This is why we have tested AirSelfie over and over. We wanted to be 100% satisfied with the final product. We can now proudly say that it is READY.

Our manufacturers are ready too. Ready to assemble AirSelfie on a greater scale and we can’t wait to have you try it out.

When we get the minimum funding we need to begin the large scale production process, we promise solemnly we will not exceed the shipping time shown on our Kickstarter campaign.

Learn about accountability on Kickstarter